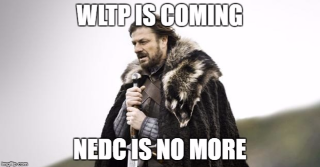 NEDC testing will cease at the end of August 2017. After 1st September 2017 all car new type approval testing will be done under WLTP rules and after 1st September 2018 all new cars will need WLTP figures. WLTP figures are more realistic so company car taxation would rise if those figures are used. However during the transitional period WLTP figures will be translated into NEDC equivalent figures and most likely be used for tax purposes.

The current NEDC test regime which provides the official emission and fuel consumption figures has been around since the 70's and manufacturers have become familiar with it. The gap between official fuel consumption and test figures has widened, though not necessarily in a consistent way between makes and models.

The new World harmonised Light vehicle Test Procedure has been designed to counter many of the criticisms of the NEDC test and will certainly bring in more thorough testing and greater consistency of results. Better comparability is to be welcomed but in most cases tested CO2 will rise and mpg fall to more closely reflect real life fuel consumption.

Higher CO2 figures, estimated at between 4 and 20% more, will  hit company car drivers, if nothing else changes, since the appropriate percentage used to calculate BIK is based on the tested figure. Cars registered under NEDC testing will keep their lower tested CO2 figure but a similar car registered once WLTP comes into force could show a higher CO2 figure and be taxed several bands higher.

The legislation is detailed in : Commission Regulation (EU) 2017/1151 of 1 June 2017 which came into force in July and does not give the industry and national regulators much time to prepare.

Most of the upcoming car launches in the next 10 months or so will have already been tested under the NEDC regime, so we may not see WLTP figures for a while. However there will be an overnight switch of test figures on 31st August 2018 when we will wake up to official emission and fuel consumption figures that are, in some cases, significantly worse on newly registered cars.

The latest Finance Act includes the phrase that WLTP numbers can  "be ignored" until April 2020 so we now have some clarity. Cars bought after then will only have WLTP figures but HMRC is yet to consider how these will be taxed.

Meanwhile new cars are being tested under WLTP but the manufacturers won't let us see the figures yet. Anyone researching a new  car will see that CO2 figures are rising already for two reasons. Manufacturers can convert WLTP figures back to NEDC equivalent using the CO2mpas tool, but won't want to be seen to be too aggressive. And they are adding extra technology to reduce NOs, but which increases C02.